Office supplies in history: The story of paper 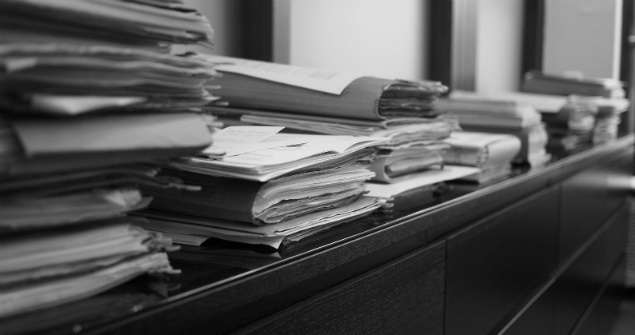 There’s a bit of a war against paper at the moment (which inspired our previous blog, Screen vs Paper). Paper production is destroying our rainforest and contributing to global warming, and what isn’t recycled is filling up our landfills. How many times have you tossed unwanted flyers, receipts or junk mail into the bin just moments after receiving them? We’ve become complacent about our office supplies — but it hasn’t always been this way. Before screens and all things digital, paper was an essential part of offices the world over. But how much do you really know about the history of this stalwart office supply? Read on for a brief history of paper.

Papyrus vs paper: what’s the difference?

Before we get into the history of paper, let’s talk about papyrus.The word papyrus is derived from the Greek word for the Cyperus papyrus plant, out of which the first office supplies were hewn. Despite the Hellenic origins of the word, it was the ancient Egyptians who first began using the plant to write on. The pith of the papyrus plant was dried and woven to create sheets for prehistoric paper — as opposed to the paper invented by the Chinese, which requires the fibres of various materials to be altered by methods such as maceration or disintegration.

The Chinese version of paper was invented by a member of the Imperial Court.

In the first millennium BC, paper — more akin to how we know it — was invented by “the God of the papermakers” in China. Ts’ai Lun, as he was more commonly known, was an official of the Imperial Court. His first paper recipe consisted of Mulberry bark, which he beat to form a sheet. Later on, hemp, rags and fish nets were added to improve the quality of the paper. A far cry from the bamboo and silk that were being used prior to that by the ancient Chinese for writing.

A battle victory and the Silk Road were how paper made its way over to the West.

It took six hundred years for paper making to spread further afield than China. First it headed east to Korea, and then Japan. Next, it travelled along the Silk Road to the Ottoman Empire and the Middle East. If the Turks hadn’t defeated the T’ang army at the Talas River in 751 AD, the secrets of paper production might not have spread west until much later. The material that would become a global staple stationery supply took several more centuries to arrive in North Africa, finally making it to Europe in the twelfth century. Although Johann Gutenberg is remembered for championing wide-scale paper production in Europe in 1453, it was actually the Turks operating out of Spain and Portugal that first began paper production in Europe around 1151.

Since the fifteenth century, paper production has become increasingly automated and mechanised.

It was only in the 1400s that paper production started becoming mechanised. From its invention in 105 AD until the fifteenth century, plant material was manually rendered into the fine fibres needed to produce office supplies good enough to write on. Water powered stamping mills were then adopted to simplify the production of pulp. As the demand for paper grew, the whole paper production process became automated: from preparation and pulping to paper making and finishing. Thanks to these advances in technology, we now enjoy the plethora of paper types available today – quite a change from the rags and fishnets of first century China. For a nifty infographic depicting the history of paper, check out Paper Online.

Nowadays, paper is no longer used just to write on. It’s used to print books, brochures and magazines, to wrap gifts, to make greetings cards, for printing documents off the internet, and even to make paper mache sculptures. If you’d like to see how stationery suppliers OfficeBox can help your business save money on paper and more, sign up for a free trial.