Mandela Month is a chance to impact the lives of others during July and beyond. 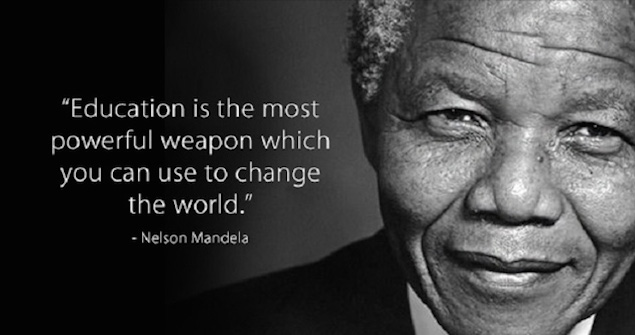 Mandela Month is a chance to impact the lives of others during July and beyond. Nelson Mandela day falls on July 18th every year. Implemented in 2009, this public holiday and tribute to our first democratically-elected president commemorates the life of one of our greatest leaders: not just of our country, but of our world. His legacy lives on through the mindset and actions he urged us to adopt to make South Africa great. He helped change the lives of millions and every year throughout Mandela month and beyond, thousands of people strive to do the same.

Basic education is a bare necessity, yet many go without.

Basic education in South Africa is something that leaves a lot to be desired.  Not only are classes growing in size, the resources at the disposal of teachers is dwindling. Without adequate resources, it is hard for teachers to teach - and near impossible for learners to learn. Chairs, textbooks, paper, rulers, calculators, pens and pencils are the most basic items a modern schoolroom can hope for, yet many schools go without. In 2011, the Eastern Cape Department of Education failed to equip almost half their schools with stationery, affecting 800,000 learners – that is according to the Eastern Cape’s Democratic Alliance website. This fact alone demonstrates just how important stationery suppliers are in remedying this resource crisis.

Organisations have started working towards supplying our schools with the resources they so need.

Parts of our education system may be in dire straits, but there is hope. Several initiatives have already been put in place to fill the stationery void our schools are facing. Last year, the Vodacom foundation – in support of the Department of Basic Education – began a stationery drive worth R6million in Pretoria that benefited 180,000 school children. Stationery 4 Africa – originally Bikes 4 Mandela – are unofficial stationery suppliers: groups of bikers go off on stationery runs to disadvantaged schools and drop off vital supplies to the children there. They’ve been going strong since 2012. The Nelson Mandela Institute is a body that was set up by Mr Mandela himself to improve the standard of education in rural areas, making it possible for even the least fortunate to have a shot at a proper education.

Stationery suppliers need to become the saviours of our education system.

Having the right tools to learn is half the battle when it comes to receiving a proper education. It’s been proven that your brain retains information better when you write things out by hand. How can our future leaders do this without pen and paper? Stationery suppliers are thus key in making sure learning is not only effective but also possible. For affordable stationery, that includes reliable delivery, contact OfficeBox today to talk about how we can help your school.